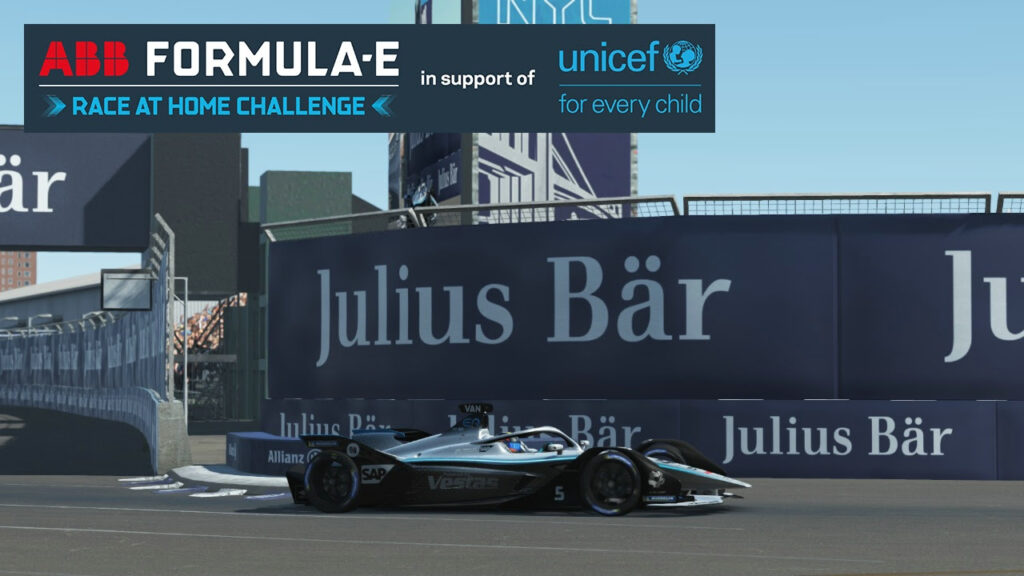 – Stoffel Vandoorne cruises to victory around the ferry terminal in New York City with a comfortable win starting from Julius Baer pole position.

– Vandoorne finally converts pole to victory after posting the quickest lap in qualifying four times out of six races so far in the competition.

– Full house for Vandoorne with an extra point for TAG Heuer fastest lap moving the Mercedes-Benz EQ driver to the top of the leaderboard.

– Kevin Siggy storms to yet another victory on the Challenge Grid as closest rival Lucas Mueller loses ground in the race to secure final grid slots.

– Point to prove; only a single point separates Stoffel Vandoorne and Pascal Wehrlein at the top of the driver rankings heading into the double-header decider on June 6 & 7.

– Advantage Siggy; Kevin Siggy looks set to start from the front in the Grand Final next weekend with a third win moving the Slovenian 53 points clear in the standings.

– To learn more about the partnership with UNICEF, visit the Formula E website or click here to make a donation to the global coronavirus appeal.

– Since launching the coronavirus appeal, funds raised by UNICEF have been used to ship over 6.4 million protective gloves, 1.2 million face masks, 270,000 respirators and 250,000 gowns worldwide.

– Formula E’s donations, fundraising and support in raising awareness of UNICEF’s mission aims to change the lives of children across the world for the better.

Rally driver and professional stunt driver Verena Mei joined the Challenge Grid for today’s race, as part of unique preparations ahead of getting married tomorrow.

Mei has previously competed in Formula Drift, Time Attack and is a Rally America class champion. Over the past 14 years, she has worked with many manufacturers as a professional driver and performance driving instructor.

“Having the Race at Home Challenge, I feel like it really brings people together. Being able to participate or watch the Formula E drivers go head-to-head at something they are not actually used to.

“A lot of people think it is an easy transition, going from a real-life race car and getting behind the wheel of a sim. But it is actually harder than I thought. I love to drive by the seat of my pants, so I feel how the car moves with me, feeling the weight transfer and when I get in a sim I mainly have to rely on the visual feedback.

“I am especially excited because this is a charity race for a good cause to raise funds for UNICEF. Actually, when I was in high school, I used to trick or treat in support of UNICEF!” 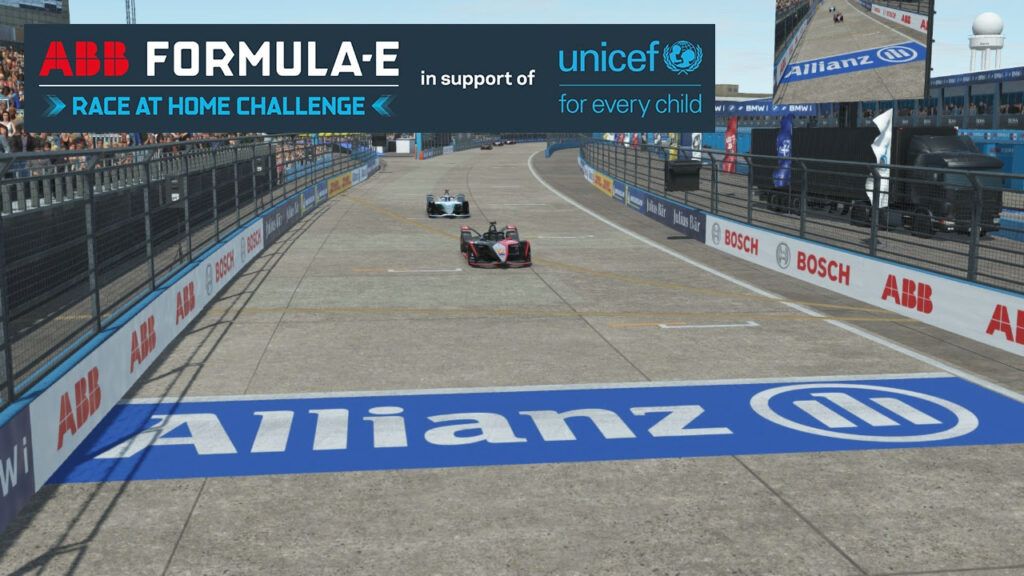 ROWLAND KEEPS VANDOORNE AT BAY TO TAKE VICTORY AT TEMPELHOF

– Nissan e.dams driver capitalises on coming together between the leaders to land first win in ABB Formula E Race at Home Challenge.

– Daniel Abt (#66, Driver Grid) has been disqualified from the race for sporting misconduct, stripped of all points accumulated to date in the Race at Home Challenge and will make a compulsory donation of €10,000 to a charity of his choice.

– Lorenz Hoerzing (#2, Challenge Grid) has been disqualified from the race and all future rounds of the Race at Home Challenge for sporting misconduct.

– Brit breaks winning streak; for the first time there wasn’t a German driver on the top step, with Rowland joining Maximilian Guenther and Pascal Wehrlein on the list of past winners.

– Tight at the top in Tempelhof; the relative pace of the Driver Grid was strong in comparison to the sim racers with Stoffel Vandoorne only 0.048s off Kevin Siggy in qualifying.

– Siggy stretches his lead; victory in Berlin meant Kevin Siggy became the first multiple race winner on the Challenge Grid, extending his advantage to 29 points in the standings. 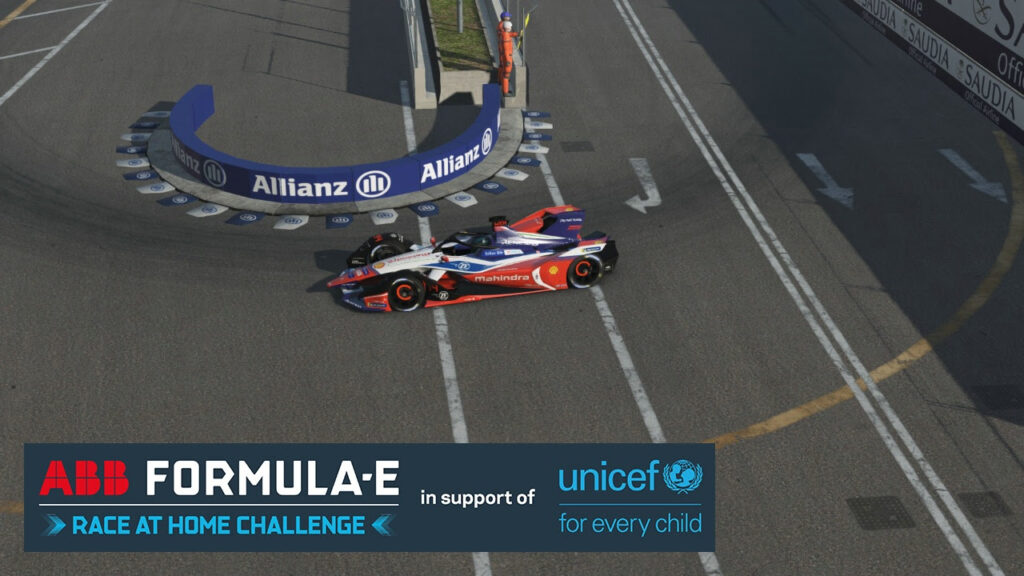 – Pascal Wehrlein fought back from a first corner collision to win second race in a row as Edoardo Mortara crashes out of the lead in Hong Kong.

– Mahindra Racing driver overtakes Maximilian Guenther in the standings as the German fails to score points for the first time in four races.

– Lucas Mueller hunts down Joshua Rogers to take victory in Hong Kong and close the gap to Kevin Siggy at the top of the Challenge Grid standings.

– Starter for 10; James Calado jumped 10 places on the opening lap, managing to avoid the first corner pile up and emerging in second position after originally starting in 12th.

– Four in four; Lucas Mueller made it four different winners in the first four races in the Challenge Grid with a late move to deny Joshua Rogers from another victory in Hong Kong.

– Lightning does strike twice; Edoardo Mortara lost the lead again in Hong Kong, but this time online, after spinning out at the front of the field in the second race of season four.

– After making his debut on the Challenge Grid in Monaco last week, Mission Motorsport’s Gareth Paterson came home in a respectable 18th place in Hong Kong.

– Now a retired Sergeant, having joined the British Army after leaving school at the age of 16, he served his country for 24 years in the Queen’s Dragon Guards and Royal Electrical and Mechanical Engineers.

– Paterson suffers from an autoimmune disease called ankylosing spondylitis resulting in fusion of the spine and he has represented the UK in the 2016/17 Invictus Games.

– Mission Motorsport helps those affected by military operations by engagement through sport and connects the armed forces community with amazing opportunities for second careers in the automotive sector.

– To learn more about the partnership with UNICEF, visit the Formula E website or click here to make a donation to the global coronavirus appeal.

– New study estimates that an additional 6,000 children around the world could die each day from the impact of coronavirus on healthcare systems. That is one child every 15 seconds and equates to 60 children during the time it takes to complete one esports race.

– Formula E’s donations, fundraising and support in raising awareness of UNICEF’s mission aims to change the lives of children across the world for the better. 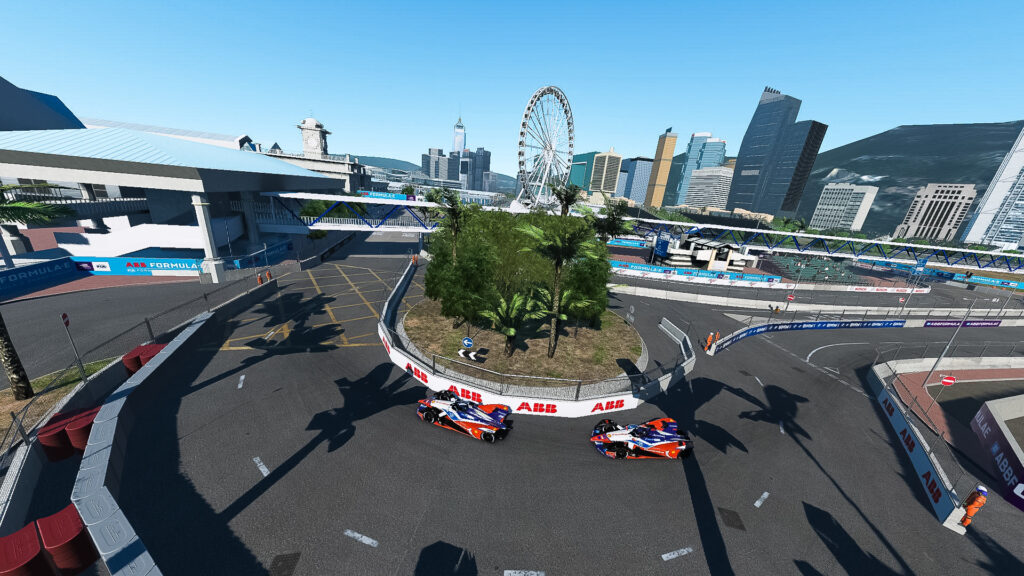 16 May 2020 – The halfway point of the eight weekend ABB Formula E Race At Home Challenge saw Mahindra Racing’s Pascal Wehrlein and Jerome D’Ambrosio head to the virtual Hong Kong E-Prix circuit for Round 4 of the sim series.

After qualifying in P2, Pascal Wehrlein was caught up in a first lap incident which saw him drop down to fourth place. Undeterred, Mahindra’s #94 driver moved up through the field, overtaking James Calado on lap four and then taking advantage of Edoardo Mortara’s mistake on the following lap to take the lead. He then opened up a commanding gap and cruised to a consecutive win, and to the top of the leaderboard.

Jerome qualified in 8th position and ran in a points-scoring position for a good portion of the race but was eliminated at the end of lap 10 due to the ‘Race Royale’ format, finishing 17th.

Earlier, Mahindra Racing’s Challenge Grid driver, Lucas Muller took a sensational victory in the closing stages of the race, moving him up to P2 in the Series; “I’m a bit speechless to be honest. I really wasn’t expecting to be fighting for a win but I think Joshua made a mistake in the chicane and then after that I was closing in and started to think that this could actually happen!”

PASCAL WEHRLEIN, #94: “Today was a bit special with the qualifying and the wet conditions, so it was unexpected for everyone. The race was chaotic at the beginning and my car ended up being slightly damaged – the steering was to the left – but I was able to be fast in these conditions and brought it home.”

DILBAGH GILL, CEO AND TEAM PRINCIPAL: “It’s been another fantastic day for Mahindra Racing! It was a chaotic start to the race, but Pascal’s pace was lightning and he took a commanding win – his second of the series which puts him top of the leaderboard with four more races to go. And with our sim racer Lucas Muller securing victory in the earlier Challenge Grid and moving up to second in the series, we couldn’t have asked for more!” 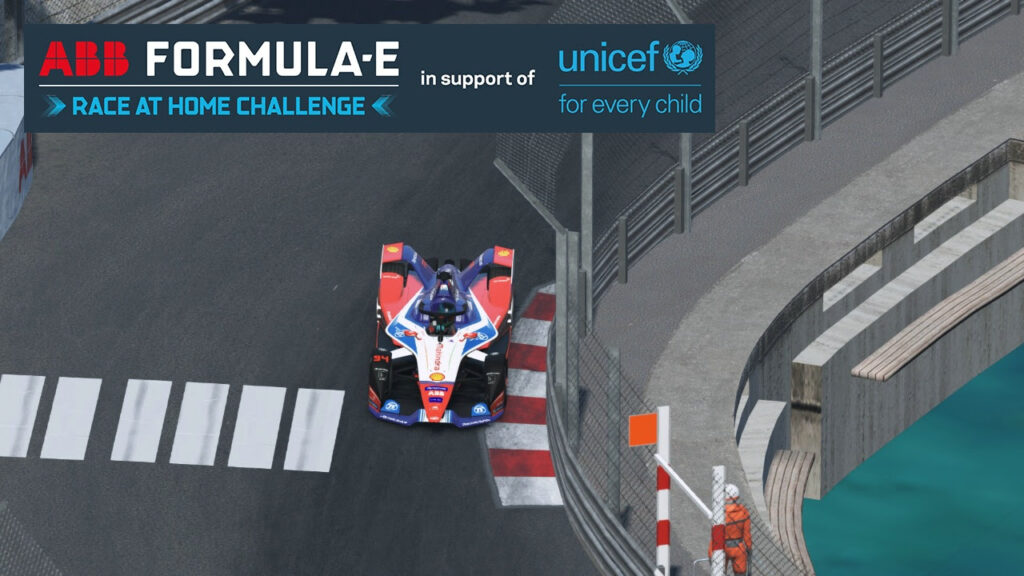 WEHRLEIN WINS WITH FAULTLESS DRIVE ON THE STREETS OF MONACO

– Mahindra Racing driver makes up for spinning out of second place at Electric Docks with faultless drive around the famous Principality.

– Repeat podium; the top-three contenders are starting to emerge in the Challenge Grid with Kevin Siggy, Peyo Peev and Lucas Mueller again completing the podium places.

– Full house at the front; both Kevin Siggy and Pascal Wehrlein collected a maximum of 27 points for starting on Julius Baer pole position, clinching TAG Heuer fastest lap and securing the race win.

– After a skiing accident in Super-G, Llovera became the first disabled driver to earn a racing licence to compete alongside other drivers and has since entered events in the World Rally Championship, World Rallycross Championship and the Dakar Rally. 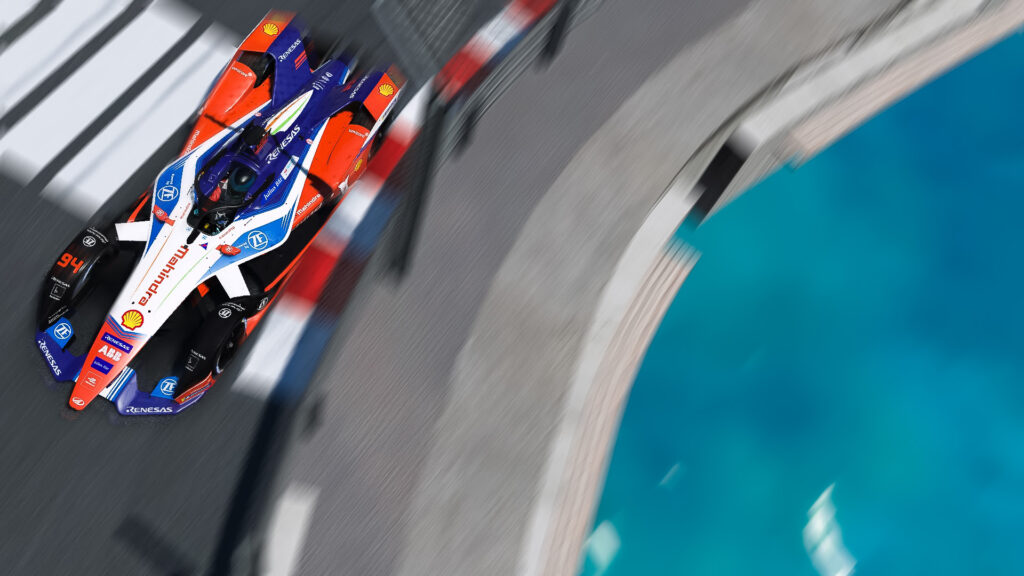 9 May 2020 – Round three of the eight weekend ABB Formula E Race At Home Challenge took place today, with all 24 regular FIA Formula E Championship drivers taking to the virtual Monaco E-Prix circuit to battle it out for victory in the sim series.

Pascal Wehrlein dominated proceedings, taking Pole Position and then a commanding lights-to-flag race victory as well as Fastest Lap to extract maximum points from the event.

Mahindra Racing’s #94 driver, who impressed in the first two rounds, made a statement straight out the box today by sealing pole position for the race, earning a €1,000 donation to UNICEF from Julius Baer, which will go towards helping support children affected by the Coronavirus crisis around the world. He went on to take a dominating win, unpressured by competitors behind. Other sim series frontrunners Stoffel Vandoorne and Maxi Günther finished alongside Pascal on the podium.

Pascal scored maximum points out of today’s event; 25 points for the win, 1 point for the Julius Baer Pole Position and a further point for the DHL Fastest Lap.

Jerome qualified in 10th position and ran in a points-scoring position for a good portion of the race but was eliminated at the end of lap 13 due to the ‘Race Royale’ format, finishing 14th. 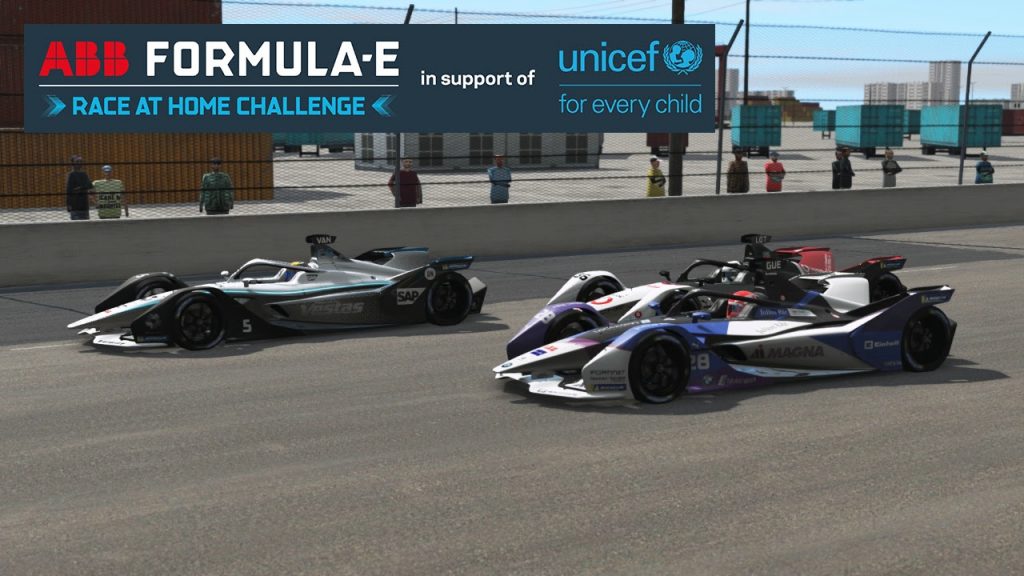 GUENTHER DRIVES TO VICTORY WITH DOMINANT DISPLAY AROUND ELECTRIC DOCKS

– BMW i Andretti Motorsport driver put on another dominant display and fended off pressure from Pascal Wehrlein to take top honours in round two.

– Peyo Peev leads from lights to flag around the Electric Docks circuit to claim victory ahead of Kevin Siggy in the second Challenge Grid race.

– Guenther the gamer; Maximilian Guenther made it two wins out of two online in the Race at Home Challenge.

– King of qualifying; Stoffel Vandoorne again could not capitalise on Julius Baer pole position with a first corner crash.